Why Aren’t You Writing About …?? I’ll Tell You. 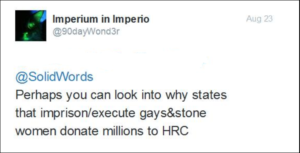 Writers and journalists get asked this question A LOT. Especially when someone feels your coverage is picking on their favorite politician, actor, or sports figure. Instead of arguing the merits of a specific case, or defending their hero, their default is “Why aren’t you writing about [whatever makes ME angry this week]?

Well, I’ll tell you why.

Here’s what you CAN do:

There’s plenty of meat, potatoes and vegetarian options in today’s news. I encourage you to read widely and examine many different points of view.

Also, if you follow my Facebook Page, I’ll be posting articles in the future about how to vett news and organization sites, how to recognize the red flags that indicate a site may be less than trustworthy, and how to quickly find and scan scientific studies.